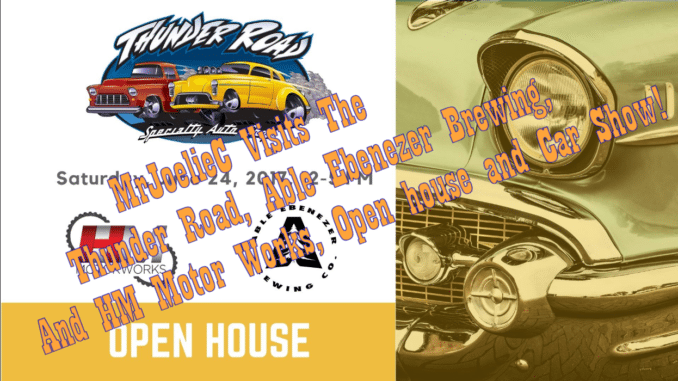 So I have often said that Beer and Cars just go together. Now I now what you are saying: “Uh – MrJoelieC? Uh – Drinking and driving? Heelllooooo?” Yes I know Drinking and driving are bad but come on. Every gearhead, motorhead, and petrolhead at one time or another has sat with a beer and looked at a beautiful Car standing still or talked about beautiful cars while drinking a beer.

At first glance hearing about a Car show with a Brewery sounds strange. But then again, maybe not…

Cars and Beer – Beers and Cars

One of the reasons I have not been posting as much is my “Car Hobby” has been getting a bit more attention of late. Yeah, I went and bought a Corvette. (More on that later.) as a result, I have been cleaning it up and going out to some of the local car shows with it. Thus, when I heard about a Car show with Beer and none other than a local brewery called Able Ebeneezer that has been getting some attention of late? How could I resist? 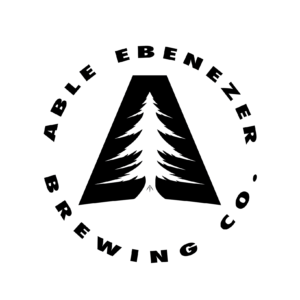 Able Ebenezer (From their website) is an homage to the inspirational actions of New Hampshire citizens who rallied behind Ebenezer Mudgett in 1772 to defy British oppression. History remembers this event as the Pine Tree Riot. With this in mind, every beer they brew is pretty much an homage to the British Oppression. 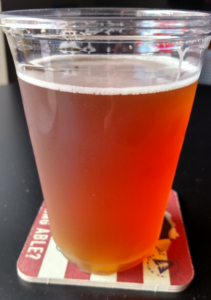 As I bellied up to the Bar, after I parked my car at the Car show, I took a scan of the beer offerings. I decided to go with the Broad Arrow India Pale Ale. This IPA is named after the symbol we – as independent Americans – took back. (Again from their website.) The King’s Broad Arrow was one of the key contributors to the American Revolution, being stamped, carved & branded into everything the King of England laid claim to in the colonies; especially Pine Trees.

For an IPA I Found it to be very good. While I found it to be much more “malty” than most traditional IPAs it still had a very Piney nose with hints of citrus. The malt really kind of hit at the end with a decent 6.5% ABV. It has a beautiful hazy reddish amber hue to it. Not a lot of head though.

I ended up heading over to the grill they had set up for the event, and grabbed a hot dog and some chips, and thus sat down in their wonderful pub set up that has a garage door opening up to their parking lot. A very spacious bar area with 2 big screen TVs dominates the area with their offerings all on tap. I listened to the Staff speak to the Car Groupies who were obviously new to their beer and found them to be very helpful and knowledgeable. 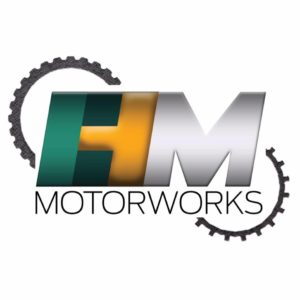 Now the other Hosts were a set of Car specialty shops. I ended up Parking my Corvette in front of the HM Motorwork’s place. HM Motorworks is an independent automotive service and repair shop specializing in European imports. They are an authorized Bosch Car Service Center, and they have the latest in diagnostic computer scanning technology to service just about any late model BMW, Mercedes-Benz, Audi, Acura, Lexus, and Infinity. Their rates are reasonable which seems to keep their customers coming back when they have other problems or maintenance needs. While I was there I saw an interaction with a customer who was leaving her vehicle and surprised to see all the cars there but she seemed genuinely to be a repeat and satisfied customer. 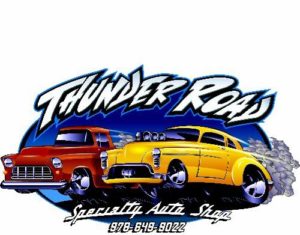 The other Host was Thunder Road Specialty Auto Shop. A genuine Mystery to me because I have lived in New Hampshire all my life and been an avid Car guy most of that lifetime and I have never heard of them.

No website that I can find but they do have a Facebook page that boasts themselves as “The best-kept secret in New England!!” Indeed, that seems true. With 25 Years in business, they have been building award winning vehicles. Touring their shop it was very obvious that they can indeed handle: Custom metal fabrication, TIG welding, custom paint including Candy color and Metalflakes. Chassis, mechanical as well as maintenance on any specialty vehicle.

I can tell you that I met some customers and saw some extreme quality motors on display that had their hands on them. They definitely seem to do some quality work and now that I know about them I will be watching out for them.

The Cars and a few Trucks 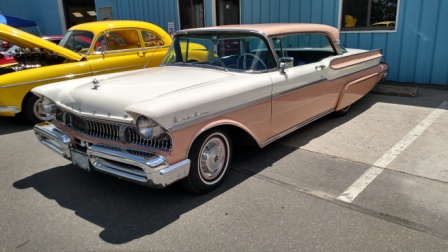 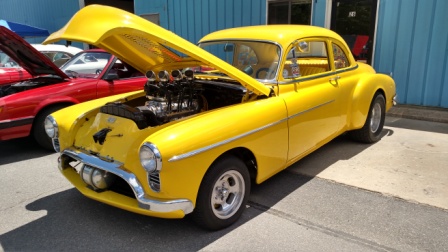 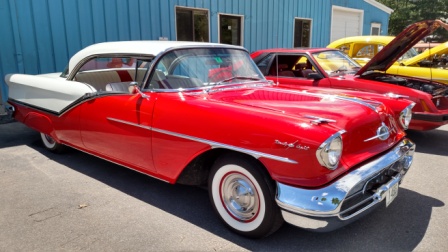 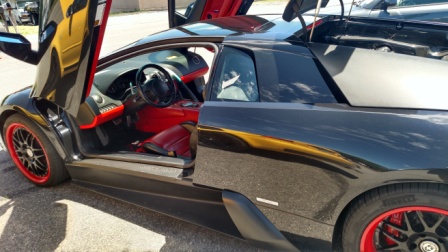 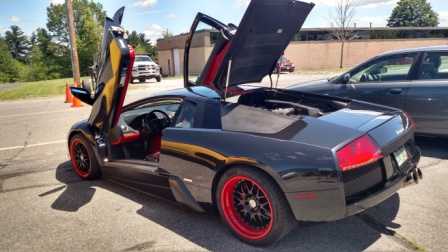 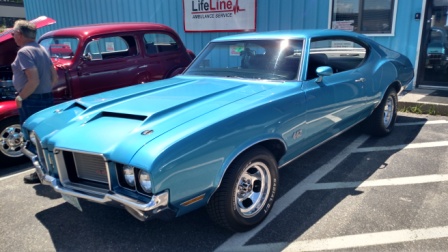 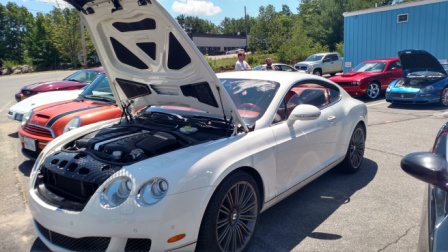 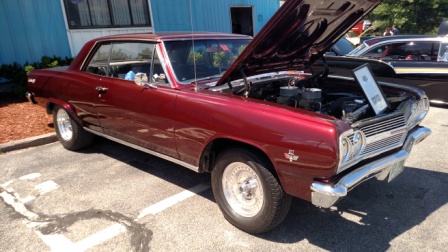 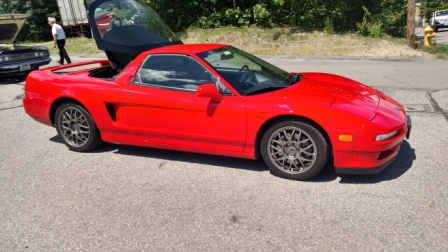 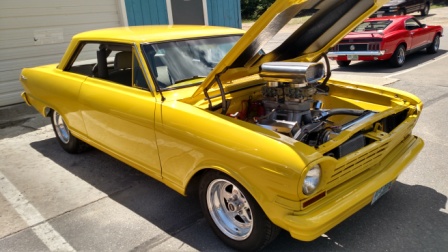 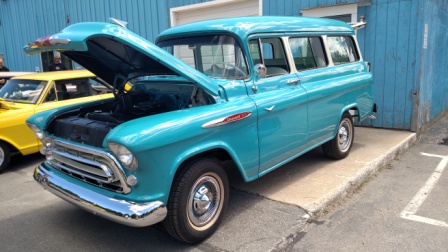 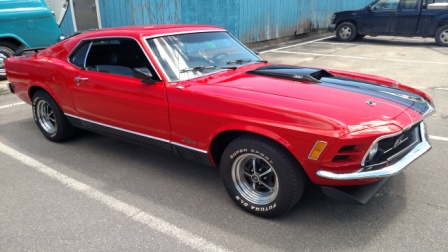 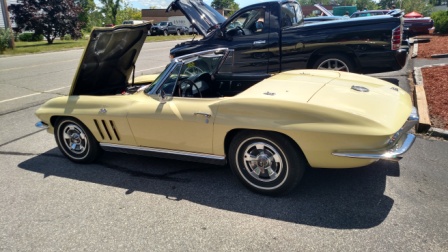 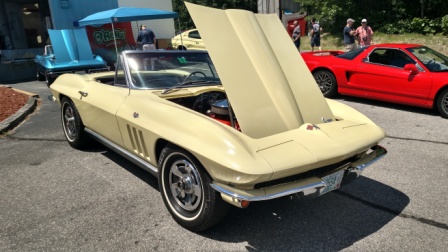 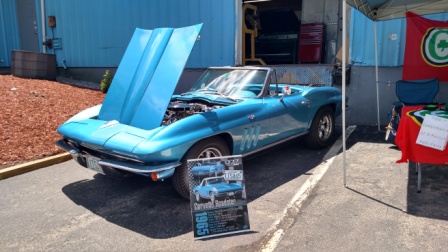 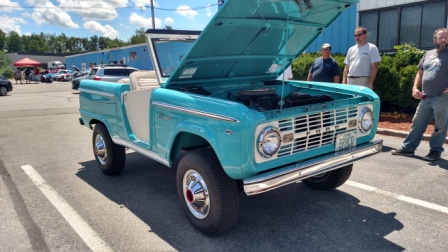 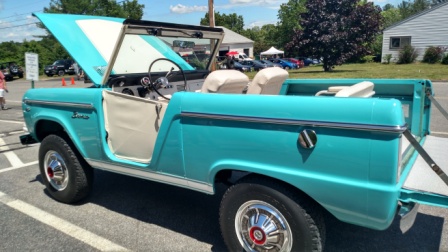 For more information on these folks please click on the below links: 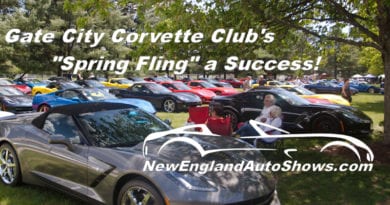 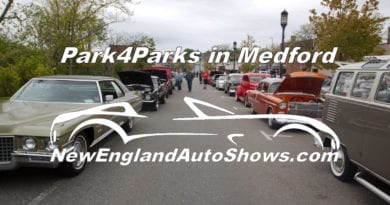 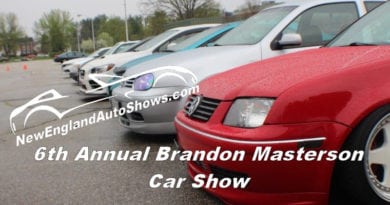 Despite The Rain A Healthy Turn Out